An Overview of Warts and Moles Removal Treatment at VCare Aesthetics 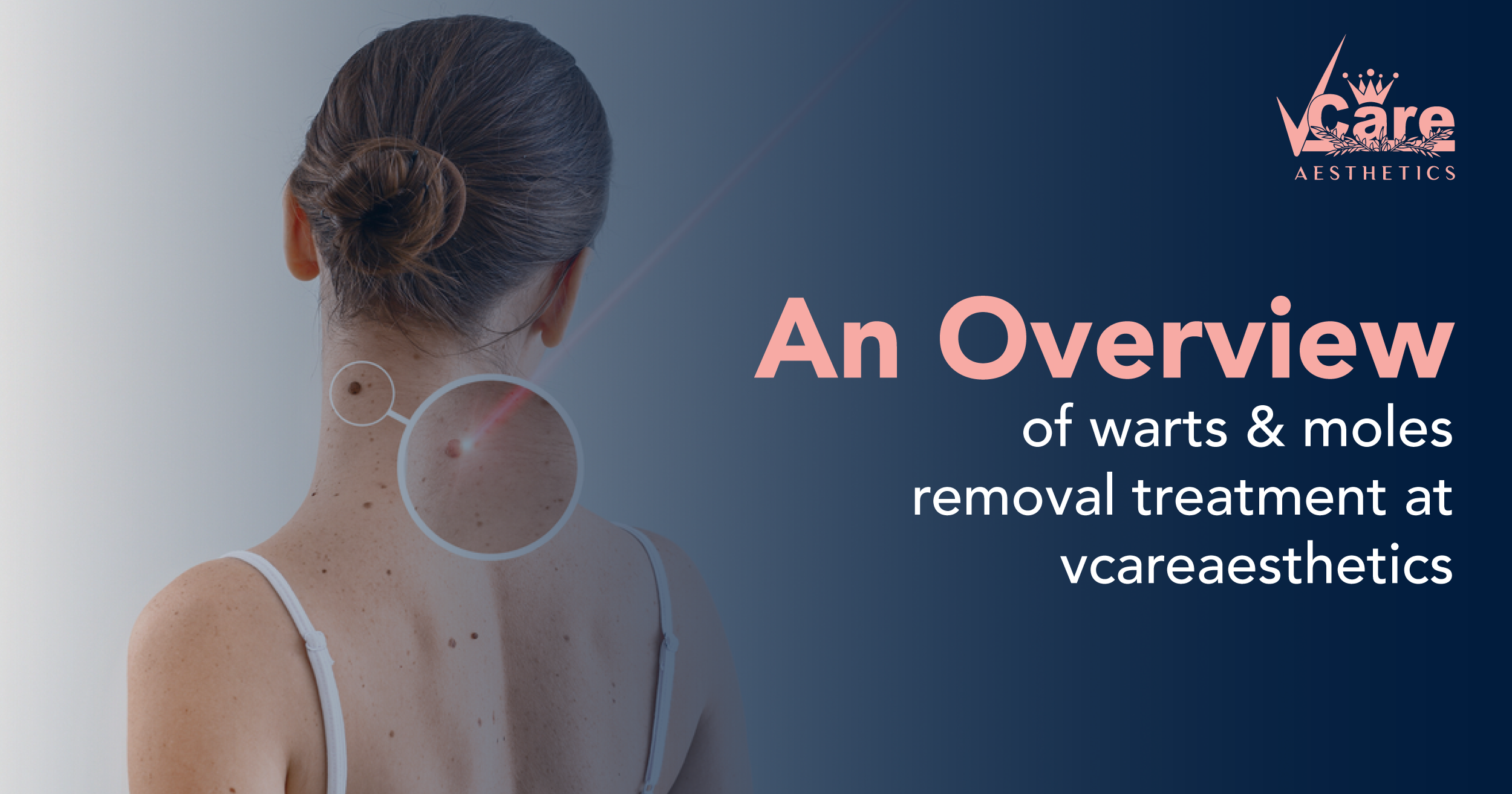 Warts and moles can be bothersome. Many individuals don’t recognize their differences, which might be confusing. The good news is that they don’t put your health at risk. They bother you and give you the sweats. Here is how to distinguish between a mole and a wart if you want to determine the problem before scheduling a spot removal.

What is a mole?

Moles, also known as nevi in medical terminology, are often benign skin growths that can appear anywhere on the body. They can be flat or elevated and are often a consistent shade of black or brown. Whether you refer to them as blemishes or beauty spots, they can be found on nearly everyone’s skin and are brought on by melanocytes (skin cells that produce colour).

Moles initially occur early in life; most countries use moles as a part of identification marks. As we age, there may be slight alterations in the moles, and new ones may continue to emerge. Sun exposure and genetic factors are thought to be related to the development of moles. Moles can be removed cosmetically for patients who find them unattractive. Different mole removal methods may be necessary for flat moles compared to elevated ones.

Let us have a look at different types of moles, which are as follows:

Birthmarks are commonly used to describe congenital moles. They are present at birth or appear shortly after that.

These have irregular textures, hues, and shapes. Atypical moles can occasionally develop into cancer. Our dermatologists advise inspecting your skin every month for any new changes.

These are the common moles that can be seen almost everywhere on the skin. Ten to forty moles on the body are thought to be typical for humans.

Can you prevent moles?

You cannot alter your genetic propensity for mole formation, but you may take precautions to protect your current moles and prevent the growth of new ones. Always employ sun protection measures, such as wearing broad-spectrum sunscreen, covering yourself with UV-protective clothes, and finding shade during the hottest parts of the day.

You can treat moles using VCare Aesthetics’ ultimate wart/mole removal treatment and achieve natural-looking results. With the aid of FDA-approved technologies and world-class professionals, our treatments follow the client’s needs, with safety and comfort being our top priorities. As a result, anticipate stunning outcomes after a few days of treatment.

Dermatologists warn against using DIY methods to remove moles. You risk complications by accidentally removing any lesion found on your skin, including moles. Before deciding on the specifics of mole removal, our experts frequently perform a biopsy of the mole for additional assessment. Our specialists conduct a microscopic examination of the biopsy specimen and provide a conclusive diagnosis.

What is a wart?

Warts are non-cancerous growths that appear when your skin is infected with (HPV) Human papillomavirus. The virus triggers extra cell growth, making the skin’s outer layer thick and hard. They take time to develop. A mole has pigment and hair, which gives it a distinctive appearance. Both do not exist in warts. Warts can spread from one person to another during contact, while moles cannot. Moles have a high chance of developing skin cancer because of their pigment.

Warts can appear on your hands, knees, feet, or any other area of your body. They are hard bumps deeply embedded in the skin, unlike moles. They may appear smooth on the outside, but they have calluses underneath.

Although normally painless, they can occasionally itch or hurt, and they can be humiliating and disfiguring (particularly on the feet). Additionally, warts often move from one bodily region to another and spread locally. Cutting, tearing, or picking at a wart is not advised.

With the aid of FDA-approved cutting-edge laser technology, VCare’s wart removal is accomplished. Based on your issue, our skin specialists have a wealth of experience delivering outstanding outcomes. They will first help you comprehend the process, which aids in securely eradicating warts within a few hours following the treatment. You can now return to finishing up your regular job as a result.

With the help of qualified skin care and cosmetic experts in the field, the safest location is where you may achieve the greatest visible results.

Benefits of wart and mole removal at VCare Aesthetics

Let us explore several benefits of the mole and wart removal treatment at VCare Aesthetics, which are as follows:

How to prepare for your appointment at VCare Aesthetics?

It’s a good idea to arrive for your appointment well prepared. Here’s some information to help you get ready.

About wart and mole removal treatment at VCare Aesthetics

We utilize the most cutting-edge and secure methods to eliminate warts and moles. Remember to show your mole to one of our skilled specialists so they can further assess it if it is causing you to worry due to its size, shape, changing look, feel, or colour. Any inquiries you may have about wart and mole removal or any other skin condition can be addressed by our team of committed dermatologists.

Yes, mole removal largely succeeds. Receiving such treatment won’t harm because it has been tried and tested.

2. How long does recovery take after wart and mole removal?

It varies on the growth, but a minimum downtime of three days might be expected after treatment.